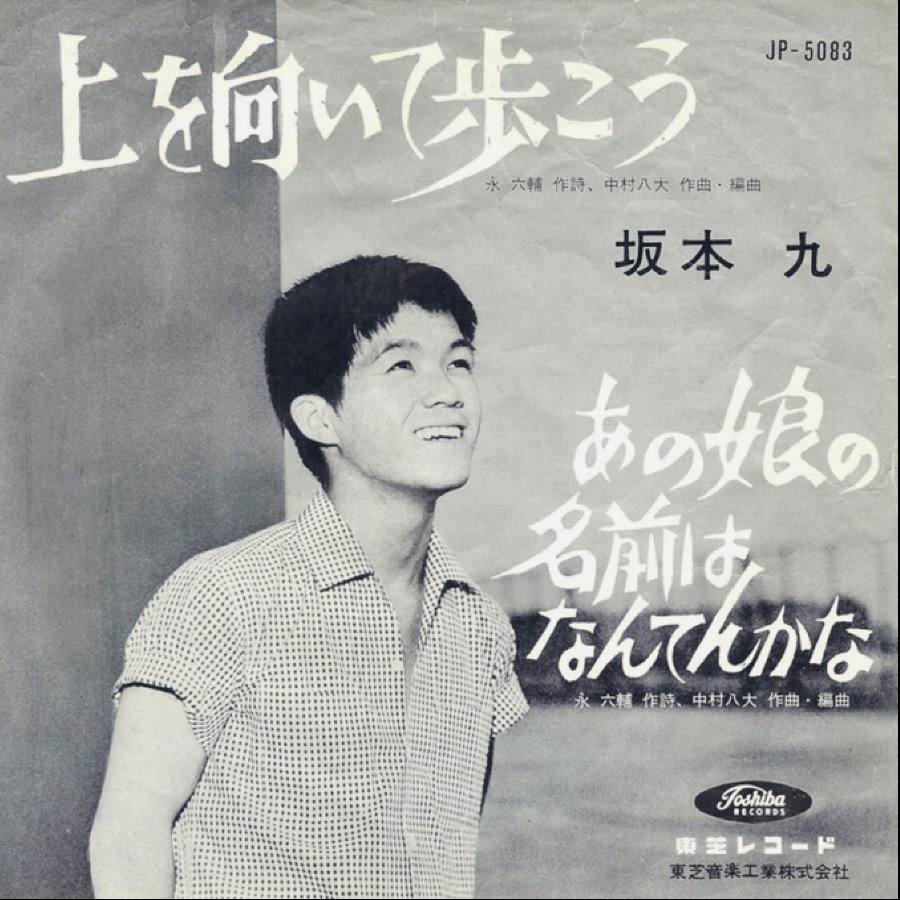 So far fascinated by Japan since childhood, only the world of music leaves me cold – with two exceptions, a troubled time during my teenage years, and traditional music. But I have still a favorite singer, Kyu Sakamoto, whose ballads and catchy rock’n’roll songs that transmit a je ne sais quoi, and I feel like dancing. At the time of his career – the 60s, Kyu Sakamoto managed to climb to the top of the US Billboard 100.

His nickname Kyu (meaning 9) comes from the kanji of his name (九) but also because he was the youngest of the nine children of his father. For three years, the second singer of a pop band, he finally slammed the door, annoyed not to be leader. If for a time he pursued his studies, he finally drop the idea to enter university, as his second band became popular. Their song became a hit, and he finally signed with a record company for a solo career.

I had already mentioned it in a previous article, but Kyu Sakamoto is known internationally for his track « ue o Muite arukou » which some of you may know under the name of « sukiyaki ». Discovered by a British producer, the title is brought back in London, then broadcast in the English speaking world under that name more « easy » to understand for westerners. This is an incredible achievement for an Asian singer at that time. The song stayed at the top position for 3 weeks during summer 1963. From that success, Kyu Sakamoto started a world tour concert in August the same year, participated in American tv shows, and sold records in the whole world. Son deuxième titre le plus connu est « shina no yoru » (China Nights).

It is true that being abe to understand Japanese makes me more sensible to his songs.

Kyu Sakamoto met a tragic end in the crash of the Japan Airflight 123, which crashed 100 kilometers from Tokyo August 12, 1985, killing 520 people.

I discovered Kyu Sakamoto, when I was a teenager, exploring the world through Internet. The few songs that I knew at that moment made me smile – I foundd that some ballads are full of humor and joie de vivre. It was surprising to discover that in reality, a lot of his songs turn out to be very melancholic (to say the least, sukiyaki being very depressing!), lyrics being about missing love, lost love or unknown love.