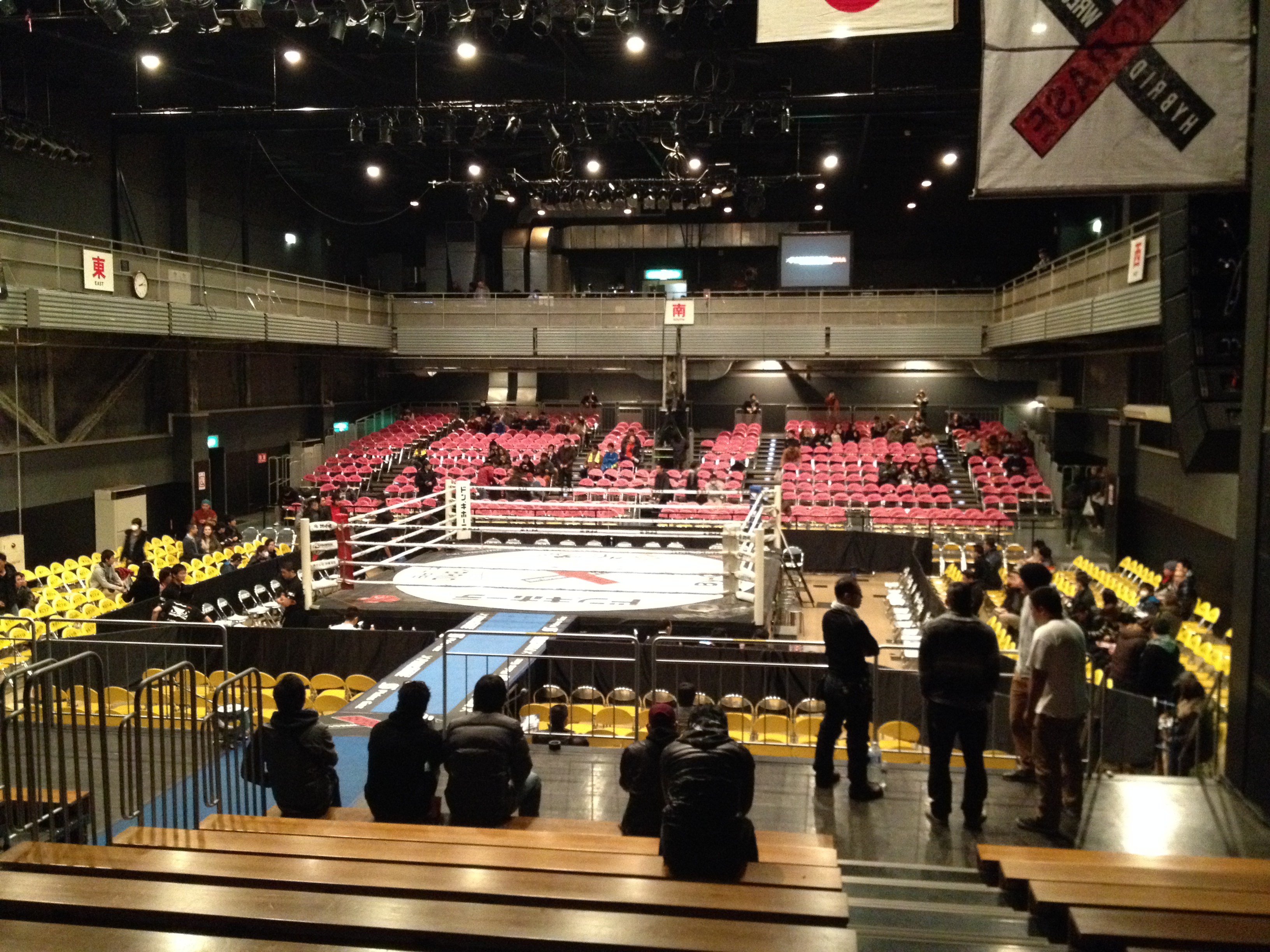 One day, I told my Nippon:

– I want to learn more about Japanese culture. I really want you to take me to see traditional theater. I want to understand better that Japan that is so mysterious and full of poesy.

– OK, on the third of February, I’ll take you to a pancrase show.

The hybrid wrestling, called pancrase is a fight sport created in Japan in 1993.  About fighting games, in my head, only two pictures : naked Greek covered with oil and bloody noises. Full of good will, I embarked in this new exciting adventure, 40 minutes from home, at the Budokan center in Ariake.

In an urban landscape that has nothing to envy the worst of Moscow, we walked a few minutes from the station to the wrestling club.

The vastness of space, massive apartment blocks, bridges – freeways, the gray and polluted skies, I no longer felt in Japan. Anonymous urban place, as there are so many, fade,  devoid of color and humanity, just cold concrete.

In the parking lot, already a lot of people are waiting, chatting.

Along with not looking so clean people, but also families, kids and surprisingly many girls, we waited for the doors to open. During that time, I asked the reason of our free tickets. A childhood friend (childhood friend is a very important concept in Japanese culture) on the occasion of  his debut in semi – pro had given tickets to my Nippon.

But no more time for chatting, as the doors are getting opened. I have butterfly in my stomach: unknown always troubles me.

Our seats B 20 & 21 are in the so-called nothern part of the arena, at a high level, on hard wood bench, and as we make our way, I check the time: 2 pm. Spotlights are blinking, the presenter annouces the first fights, of minor level. The arena is half empty.

As I couldn’t understand Japanese fully, only observation could help me follow and understand what is happening. From the public, flashes of cameras and cellphone keep poping out.

It took me some times to notice the flat TV screen broadcasting live images of the cameras surrounding the ring. Cameraman is wearing like, 10 pounds on his shoulders, I remember thinking.

From our places, we could only see the backs of the judges, so serious standing in theirs black suits. The bell rang.

Arena keep getting filled, and I swear I could almost smell the blood when players ended up with their faces covered in red.

I am relieved to tell hybrid wrestling does not seem so violent. Truth is, it looks like a strange ballet, a cunning dance between two fighters, flexible to the point they can rivalise with any Yoga guru. From the ring tension rises. They observe each other, throw a kick, a punch.

Then all get so fast. The two bodies are entwined, and there is no way to understand whose leg it is, or whose arm. The players are impressive, showing great technique.

I slowly get used to the screams in the arena, the public go crazy as the important fights time is approaching:

The public is more violent than the players themselves.

Their naked backs show bruses, faces are bleeding, one opponent is taken out of the ring on doctor’s orders. Suddently spotlights are moving in all directions. Finally, the awaited battle between champions is starting. Music is strong, the presenter is over excited. We have been there for 2 hours already and we were not bored for a minute.

Having understood quite intuitively the rules, I can anticipate results quite well. My Nippon however, is still struggling to follow. His friend won the fight, but the tournament is not over yet.